It's Only Natural To Resist. "We know too well that our freedom is incomplete without the freedom of the Palestinians." – Nelson Mandela

“Palestine belongs to the Arabs in the same sense that England belongs to the English or France to the French. It is wrong and inhuman to impose the Jews on the Arabs… Surely it would be a crime against humanity to reduce the proud Arabs so that Palestine can be restored to the Jews partly or wholly as their national home”

Olivia Zemor, head of an 87-member delegation of mostly French and Egyptian pro-Palestinian activists, speaks to the press after they arrived in the Gaza Strip via the Rafah border crossing, between Egypt and the Palestinian territory, on December 27, 2012. 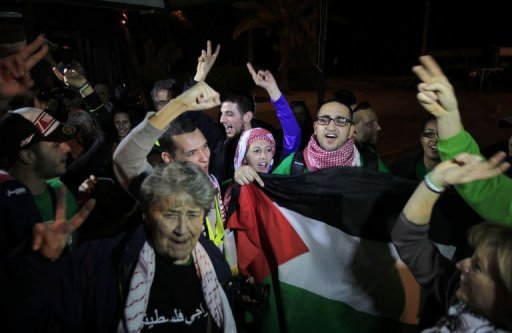 Members of the mostly French and Egyptian delegation of 87 pro-Palestinian activists flash the sign for victory and wave the Palestinian flag as they arrive in the Gaza Strip via the Rafah border crossing between Egypt and the Palestinian territory on December 27, 2012.

AFP – A delegation of pro-Palestinian activists, mainly French and Egyptian, crossed into Gaza from Egypt on Thursday to deliver aid, AFP correspondents at the border reported.

The “Welcome to Palestine” delegation of about 90 people is to stay in the territory until January 1, in solidarity with the people of Gaza and in protest against the Israeli blockade in force since 2006, organisers say.

Organised by French group EuroPalestine, the delegation includes 60 French members and 25 Egyptians, and entered Gaza through the Rafah border terminal, the only land crossing between the territory and the outside world not dependent on Israel, which also maintains an air and sea blockade.