It's Only Natural To Resist. "We know too well that our freedom is incomplete without the freedom of the Palestinians." – Nelson Mandela 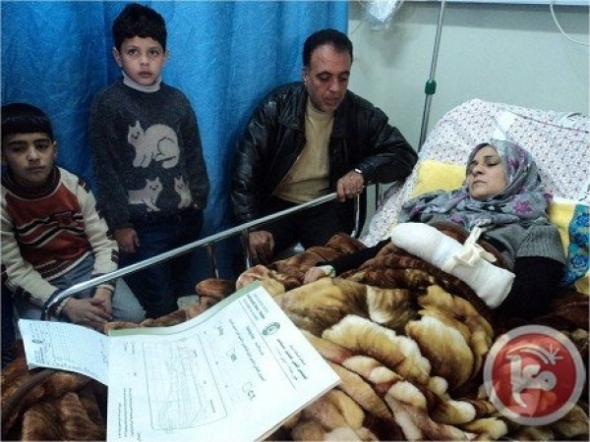 Suad Jaara was shot in the hand by an Israeli soldier who killed her friend Lubna al-Hanash near Hebron on Jan. 23.MaanImages

Ma’an News – “I saw an Israeli soldier on the main road firing gunshots haphazardly, so I put my left hand on Lubna’s back, and grabbed her to try and run backward. A gunshot hit my hand, and I shouted as I ran.

“I thought Lubna was running behind me until I reached the security guards of Al-Arrub College who took me to a clinic in the camp before an ambulance arrived and took me to hospital.”

This, says Suad Jaara, 28, is what she witnessed Wednesday afternoon when Israeli officers near al-Arrub refugee camp shot her and her friend Lubna al-Hanash. Lubna, 22, died hours later.

Speaking to Ma’an, Jaara said Thursday that she and Lubna were walking on the campus of Al-Arrub College about 100 meters from the main road when they came under fire.

“An Israeli soldier was shooting from his rifle while a white car was parked on the roadside. There was nobody in the area except Lubna and I. He was a criminal … yes, a criminal who opened fired at us in cold blood killing Lubna and injuring me.”

Jaara’s testimony contradicts claims by the Israeli army’s chief of central command on Channel 10 Wednesday evening that the woman was trying to hurl a Molotov cocktail at an Israeli vehicle.

An army spokeswoman also told Ma’an on Wednesday that “soldiers were attacked by Palestinians who hurled multiple firebombs at them while they were traveling near al-Arrub. Soldiers returned fire and the circumstances of the incident are currently being reviewed.”

But Jaara says she and her late friend were the only ones in the area, walking around and enjoying the scenery.

“Lubna arrived two days ago to visit her sister, who is married to my brother. She had heard about Al-Arrub College and she wanted to visit it. I accompanied her to campus and she admired the area because it’s in a charming natural landscape. When we decided to leave campus, a criminal fired at us and Lubna died a martyr.”

Jaara is an employee at the Ministry of Prisoners Affairs. Her brother Jihad was a gunman in Fatah’s al-Aqsa Brigades in the Bethlehem area. He was deported to Ireland after the Nativity Church siege in 2002.

Israeli forces have shot and killed a woman today near Hebron and injured another.

It has been reported that Israeli soldiers traveling in a civilian car opened fire at a group of people at the entrance to al-Arrub refugee camp south of Bethlehem.

According to Al-Quds newspaper Hanash was a fourth-year political science student at Al-Quds University and had been visiting her sister in Arroub camp.

Locals say that there were no clashes in the area at the time and that after the shooting Israeli soldiers prevented an ambulance from arriving at the scene for around 10 minutes.

I guarantee you won’t hear about this on mainstream media.
I refuse to stay silent about injustice.
I am the voice for the voiceless.

The mother of 22-year-old Palestinian Lubna Hanash mourns over her daughter’s body.

The British government has warned that the official authorisation of Israel’s first settlement university will create another hurdle in the peace process.

Israel’s defence secretary, Ehud Barak, approved the upgrade of a college in the settlement of Ariel, 11 miles inside the West Bank, earlier this week.

In a statement released on Thursday, the British foreign office minister Alistair Burt said the UK was deeply disappointed by the decision.

“Ariel is beyond the Green Line in a settlement that is illegal according to international law. This decision will deepen the presence of the settlements in the Palestinian territories and will create another obstacle to peace,” the statement said.

Burt repeated the government’s call for Israel to reverse a recent spate of settlement expansion plans, saying it should “take no further steps aimed at expanding or entrenching settlement activity”.

A spokesman for the Israeli foreign ministry said it was “disappointing to see that a [UK Foreign Office] minister should adopt the contested Palestinian position hook, line and sinker, thus adding controversy where it is already in excess”.

Britain and other European countries have become increasingly vocal in their criticism of Israel’s plans to build thousands of new homes in settlements in the West Bank and East Jerusalem. They say such expansion threatens the possibility of a viable Palestinian state.

An internal analysis paper prepared by Israel’s foreign ministry has warned that the European Union may press for the establishment of a Palestinian state independent of negotiations in 2013.

According to a report in Haaretz, the paper said: “A growing understanding can be seen in the EU of the ineffectiveness of the current process.

“This understanding is accompanied by repeated calls to find new channels of progress … The emphasis from their perspective is not on actual direct negotiations between Israel and the Palestinians, but rather on the essential need to move ahead quickly to a permanent-status solution, because the EU recognises that without a solution, things could go downhill on the ground.”

European diplomats in Jerusalem have warned that 2013 could be the last chance for the creation of a Palestinian state.

Officials at Israel’s foreign ministry are concerned about the country’s growing isolation internationally, but fear there is a gap between their position and the stance taken by Israel’s political leadership.